On The Shelves: DOCTOR WHO #13 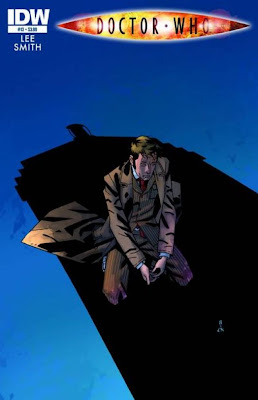 My first issue as the regular artist on IDW's DOCTOR WHO comic (issue #13) comes out today. It's the beginning of the end, as they say. This issue starts the final four-part story arc for the 11th Doctor, "Final Sacrifice", as well as the final few issues of the current series before we relaunch with a new #1 and a new Doctor.

And while I'm at it, a big public 'thank you' to Chris Ryall, Denton Tipton, Tony Lee, Gary Russell, and the rest of the gang at IDW and the BBC for asking me back on a regular basis. I hope everyone enjoys the final 10th Doctor issues as much as I've enjoyed drawing them.
Posted by matthew dow smith at 9:50 AM

Email ThisBlogThis!Share to TwitterShare to FacebookShare to Pinterest
Labels: Doctor Who, On The Shelves

Finding your cover for this issue is darn near impossible. Why does it have to be so darn pretty? Glad you are going to continue drawing the 10th and then 11th Doctor.