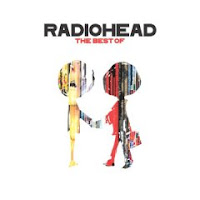 RADIOHEAD: The Best Of

A number of my writing friends like to play music when they’re working. And for some reason, most of them listen to a lot of heavy metal at high volume. They claim it helps blot out the outside world so they can focus on the interior world they’re trying to put down on the page. It sounds plausible to me, but I’ve never been able to do it. For one thing, I’ve never been a huge fan of metal, but mainly it’s because I have a hard time writing while listening to anything with words in it. I end up listening to the music instead of working.

When I’m drawing, I can listen to anything, though I tend to like podcasts and books on CD. They help pass the time while you’re sitting at the art table, and the words don’t seem to knock me out of the creative space we all create in order to work. But I can’t do it when I’m writing.

These days, I tend to put on some jazz or minimalist classic music when I’m writing, especially the ‘modern’ jazz of the 1950s. Love that stuff and the mood they create helps me sink into the emotional landscape of the book I’m writing right now.

All of which brings me to Radiohead. I never really got into their work, though many people I love and respect are huge fans. So when they put out a ‘Best Of’ collection, I thought I’d pick it up and listen to it in the car or something, get to know their work a little better. The collection had a number of songs I’ve heard and liked, if never enough to run out and buy the albums they were on.

Yeah... now I have to go out and buy the albums all those songs are on.

For years, people have been telling me how interesting and unique this band is, but I’d never listened to any of their songs enough times to pick up on all the layers they create in the music. I’ve always been a fan of English New Wave, and Radiohead builds on that tradition, adding in the distorted dissonance of American bands like Sonic Youth and some new elements I’ve never heard anywhere before.

I have to say, the music is just breathtaking. And the music geek in me just loves listening to it. I wish I could do things like that with a guitar, but I could never be that daring.

But the best part... I can actually write with Radiohead playing in the background. Something about the haunting and indecipherable vocals is just right for maintaining the delicate balance between creating a mood for me to work in and actually doing the work. We’ll see if it has any effect on the emotional landscape of the book. If anything, their music might influence it for the better.
Posted by matthew dow smith at 1:15 PM

You can never quite understand what Thom Yorke is saying, but Radiohead lyrics are dynamite. 'Fitter, Happier' didn't make it to the hits compilation. It consists of a "Steven Hawking" voice speaking and this sample looping in background: This is the Panic Office, section nine-seventeen may have been hit. Activate the following procedure.

Fitter, happier, more productive,
comfortable,
not drinking too much,
regular exercise at the gym
(3 days a week),
getting on better with your associate employee contemporaries,
at ease,
eating well
(no more microwave dinners and saturated fats),
a patient better driver,
a safer car
(baby smiling in back seat),
sleeping well
(no bad dreams),
no paranoia,
careful to all animals
(never washing spiders down the plughole),
keep in contact with old friends
(enjoy a drink now and then),
will frequently check credit at (moral) bank (hole in the wall),
favors for favors,
fond but not in love,
charity standing orders,
on Sundays ring road supermarket
(no killing moths or putting boiling water on the ants),
car wash
(also on Sundays),
no longer afraid of the dark or midday shadows
nothing so ridiculously teenage and desperate,
nothing so childish - at a better pace,
slower and more calculated,
no chance of escape,
now self-employed,
concerned (but powerless),
an empowered and informed member of society
(pragmatism not idealism),
will not cry in public,
less chance of illness,
tires that grip in the wet
(shot of baby strapped in back seat),
a good memory,
still cries at a good film,
still kisses with saliva,
no longer empty and frantic like a cat tied to a stick,
that's driven into frozen winter shit
(the ability to laugh at weakness),
calm,
fitter,
healthier and more productive
a pig in a cage on antibiotics.