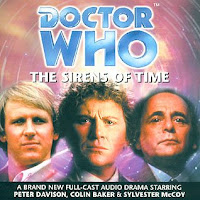 DOCTOR WHO: THE SIRENS OF TIME
by Big Finish Audio

I'm hard at work on the third issue of MIRROR'S EDGE, and running out of things to keep me entertained. I've already listened to all the audiobooks I've stored in my computer (including delightful recordings of two Christopher Fowler mysteries I discovered on iTunes), so it was time to hunt out something new.

I'd heard that Big Finish Audio was doing new radio shows continuing the long-running (and recently returned) British television show, Doctor Who, but I've never listened to one before.

Anyone who talks to me for more than a few minutes probably knows that I have two great nerdy pleasures -- old radio shows and Doctor Who. The combination of the two was too hard to resist, so I downloaded the first story Big Finish produced, THE SIRENS OF TIME.

I'm about halfway through now and loving every old-fashioned minute of it. I've always enjoyed the rigorous demands of telling a story with only dialogue and sound effects. It's tougher than you would think, but the team behind this production has it well in hand. I suspect I'll be downloading the next story as soon as this one is done. Since Big Finish has produced more than 75 Doctor Who stories, I should be well-entertained long after the six issues of the MIRROR'S EDGE mini-series are completed.
Posted by matthew dow smith at 12:41 PM

Wait...did my eyes deceive me or did I see Peter Davison on the cover of that audiobook??? He will win you over to his charm as the 5th doctor yet!!!!! : D

Prepare yourself... since finishing SIRENS OF TIME, I've picked up several of the Big Finish productions, including more than a few adventures of the 5th Doctor.

I know, it's shocking. Still like the 7th Doctor and Ace combination best, but they've all been really entertaining.

Still don't get the whole celery thing, despite the CAVES OF ANDROZANI explanation...