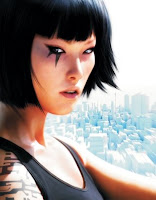 The first issue of the Mirror's Edge mini-series hit the shelves this week, with a beautiful computer rendered cover from one of the artists at EA Dice, who produced the game this comic is based on.

The script is by video game writer Rhianna Pratchett, and the colors are by

Jim Charalampidis. I just got a sneak peek at Jim's colors for issue #2, and they're looking really sharp.

Much like SUPERNATURAL:ORIGINS, the ME comic is a prequel, setting up the game while telling a stand-alone story at the same time. Rhianna's scripts have been quite good, with more subtext and characterization than a lot of comics out there. I've been pretty lucky with writers throughout my career, but Rhianna is definitely a stand out.

Here's the official blurb from the DC Comics website:

Coinciding with the release of the highly anticipated new Electronic Arts game Mirror's Edge comes an adventure unlike any other! Faith is a Runner in the city – a courier who delivers sensitive cargo by traversing the rooftops of the city's skyscrapers. But how did she come by this unique black market trade...and what secrets from her past may affect her future?

HERO CHICKS ARE THE COOLEST! Especially hot Asians. There are too few female super heroes, so I'm glad Mirror's Edge exists. Mad props to Rhianna for making Faith more than just a pretty face. The art and coloring ain't too shabby either. ;)

Thanks, Steve. Glad you liked. It's definitely a departure for me, but I'm having fun with it. Let me know what you think of the next one.