Back From The Big City 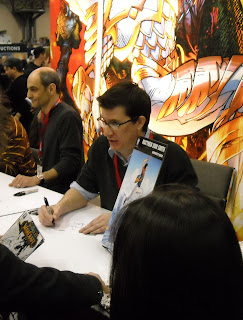 Just got back from my quick appearance at the New York City Comic Con.

Since I'm smack-dab in the middle of my last issue of MIRROR'S EDGE, I could really only go down for one day to talk to a few editors, catch up with old friends, and sign a few books.

I always get a little overwhelmed at conventions. There's a lot of people, a lot of booths, and far too much to stare at. I've done a couple of smaller conventions in Albany, and a number of World Horror and World Fantasy conventions, but this was my first big comic book convention since my last appearance at San Diego Comic Con five years ago, back when I was working as a staff artist for Crossgen Entertainment.

And yeah, it was all a bit overwhelming, but I had a good time. Got to see some old friends like Michael Gaydos, Barbara Kesel, Jay Liesten, Randy Martin, Jackie Kessler, Caitlin Kitteridge, Bill Anderson, Steve Seagle, and Tommy Lee Edwards. And I got to chat with Colin Baker, who played the sixth Doctor, which was a real thrill. I'm a huge Doctor Who fan, and no matter how calm I can be with famous comic book creators and movie stars, I always get weak at the knees when I meet Doctor Who people. I got all tongue-tied seeing Paul Cornell again, along with Euros Lynn (one of the best directors on the new Doctor Who series and the Torchwood spin-off) and Eve Myles, who plays Gwen Cooper in Torchwood.

I also got a chance to talk with James Robinson, who gave me my first break at DC when he suggested me as a fill-in artist for his STARMAN series. Still one of the best monthly comic books ever produced. DC is re-issuing the entire series in 5 omnibus volumes. The first two are out now, and you should really pick them up. They're amazing.

And I also ran into Ginjer Buchanan, a frequent instructor at the Borderlands Boot Camp and the head editor for Penguin Books' science fiction and fantasy lines. She introduced me to Amber Benson and Anton Strout, and said some very kind things to them about my Fade novel.

But as amazing as that was (and it was pretty damn cool, believe me), the highlight for me had to be getting to sign at the DC booth. I'm almost never asked to sign at this kind of convention (c'mon, who wants to get my autograph when you can get Amber Benson's or Jim Lee's?), so that was a real thrill for me. A big thank you to everyone who showed up and asked for my autograph or a sketch. 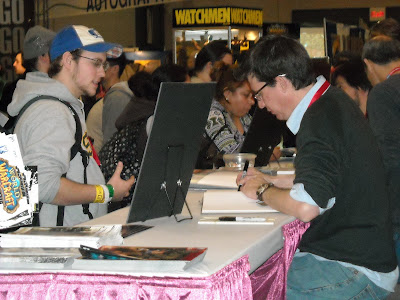 And special thanks to Mike Spring, Claire Stancampiano, and Ryan Robbins, who kept me company and helped keep my ego in check through the whole thing. Hard to get a big head when your friends are there to remind you how tongue-tied you get meeting Doctor Who people. Thanks, guys.
Posted by matthew dow smith at 4:20 PM

I knew I should have asked you to sign my chest!

Remind me next time, Anton. I'll bring a pen. But seriously, it was great meeting you.

And for everyone out there reading this, do me a favor and get a copy of Anton's book, DEAD TO ME. Anyone who can make chest-signing jokes on a blog deserves some free publicity.

Sounds like you had a great time - great pics!. Sorry I missed this one. Are those new glasses, or did I forget what the old ones looked like?

Sorry you missed this one too, Ellen. And yeah, the glasses are new. After three years of trying to find frames that I liked, I finally came across this pair on a UK website. On the down side, I look more like Evan Fade than ever. On the up side, no one points at me across a crowded street and shouts, "Oh my God, it's Harry Potter".