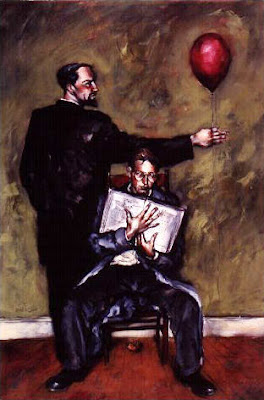 I was cleaning out some files on my computer a while back and came across this beautiful piece by painter and comic book artist Michael Gaydos. As far as I know, this is the first illustration of Evan Fade ever created.

I originally envisioned FADE as a comic book for the now-defunct Caliber Comics back in the mid-90s. They put out a lot of my earliest work in comics, including the (creatively uneven) graphic novella "Walk Through October". FADE started out as a way to continue that story, but I didn't have the confidence to draw it myself.

Enter Michael Gaydos. Michael had been doing a lot of work for Caliber around the same time, and his work just utterly knocked my socks off. Still does, actually. His work on the Marvel Max line's ALIAS is absolutely stunning.

Michael and I did a couple of short stories together for the original NEGATIVE BURN, including a piece that would bridge the gap between WALK THROUGH OCTOBER and FADE. And somewhere in there, Michael painted this piece featuring Evan and the villain from WTO, Mr. Balloon.

Sadly, Michael and I never got to finish work on any of the FADE material. We were both lucky enough to be fielding offers from other publishers and we just never got around to FADE. We talked about it over the years, but our schedules never really lined up.

And somewhere, there are three pages of a FADE short story that Michael started painting before being called away to larger pastures. I reused that story idea for the new NEGATIVE BURN anthology and drew it myself.

Yeah, Michael would have done it much better.
Posted by matthew dow smith at 1:56 PM