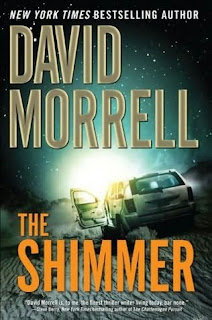 THE SHIMMER
by David Morrell

Several years ago, when I first started thinking seriously about learning how to write prose, I tried out for the first of Borderland Press' writing boot camps. At the time, F. Paul Wilson and I were pitching projects to do together (which ended up being his adaptation of THE KEEP for IDW) and I was visiting his website on a fairly regular basis. While digging around in his always entertaining forum, I happened to come across an upcoming appearance thread where FPW mentioned he'd be teaching at a writing workshop, and if anyone wanted to attend, they could try out.

With no idea what I was in for, I wrote the first 30 pages or so of a horror novel that had been kicking around in my head for a while (the first prose I'd ever really written), and sent it off. As anyone who's read this blog before knows, I got in, had an amazing time, met my best friend, and have gone back several more times to learn everything I can about this strange beast called 'writing prose'.

But to be honest, I went that first time to learn everything I could about writing from Paul. He was (and still is) one of my writing heroes, and I thought if I could learn how he did it, then maybe I could do it, too. I'd heard of the other instructors -- Tom Monteleone, Richard Chizmar, and David Morrell -- but I was nowhere near as familiar with their work as I was with FPW's. I was in for a surprise. Not only would I meet Tom -- who has become a kind of writing father figure to me (at least in my head) -- but I also got to hear what David Morrell had to say about writing.

I was more than familiar with David's famous creation, John Rambo (or at least the cultural icon Rambo became once he escaped from the printed page on to the movie screen), but knew nothing about the author or the rest of his work. But on the first night of boot camp, he gave a lecture (which started out with the deceptive question, "Why do want to be a writer?") that knocked my socks off. Much of what he has to say on the subject can be found in his excellent book, LESSONS FROM A LIFETIME OF WRITING. It's one of the few truly useful books on writing that I always recommend, and do so once more. If you want to be writer, go read it. Now.

After the dust settled and I was back home, I went out out and bought as many of David's books as I could find (and quite a few of Tom's, as well). I liked those enough that I've taken to buying his new books as soon as they come out in hardcover. Which brings me to his latest, THE SHIMMER.

As everyone who follows my blog knows, I've been buried under work recently, racing against the clock to get out various issues of the DOCTOR WHO ongoing, and wishing I had more time to read. Still reading a lot. Just not as much as I'd like. But every once and a while, something happens and I either have to step away from the art table to give my brain a rest, or I'm stuck in a brownout or a thunderstorm with nothing to do but twiddle my thumbs, waiting for the lights in my office to come back. On Friday, when the lights dimmed and didn't go back up, I knew I was in for a long, frustrating afternoon.

So, I did what I always do, I grabbed the chance to catch up on some reading, pulled out THE SHIMMER and dove right in. By the time the lights were back, the book was finished, and my socks had been knocked off again.

I'd been expecting one of Morrell's typical thrillers (which aren't really all that typical, but I mean typical for him). Instead I got an interesting mix of genres held together by strong description, well-drawn characters, tight plotting, and his usual smooth prose. It's one part thriller, one part sci-fi mystery, with a dose of technothriller thrown in for good measure. But the best part is the ending. He made a choice about the ending of this book that fits so well with what I like in fiction, but if I told you what it was, and why I like it so much, it would probably ruin the whole story for you. Seriously, though... I loved how he handled the ending.

And again, to be honest, I probably would never have read this book if it hadn't been for that first Borderlands Boot Camp. If I'd come across this book in the store, I probably wouldn't have paid it much attention. At most, I'd have thought, 'hey, isn't that the guy who wrote FIRST BLOOD?' and moved on to something else.

I would have missed out.
Posted by matthew dow smith at 8:32 PM

Email ThisBlogThis!Share to TwitterShare to FacebookShare to Pinterest
Labels: Borderlands Boot Camp, David Morrell, On The Nightstand, THE SHIMMER