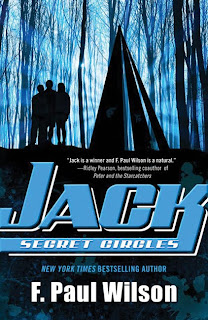 I've talked a number of times about going through the Borderlands Boot Camp program, but I'm not sure if I've ever mentioned how it changed my reading habits.

As anyone who knows me can tell you, I've always been an avid reader. They can tell you how I'm prone to boring everyone around me with long lectures about the books I love. Not to mention the sheer number of books in my office, and my often mocked need to alphabetize them.

(Can't help it. Spent too many years working in a bookstore.)

I've spent my entire life reading nearly any book I could get my hands on -- Fiction, Non-Fiction, Sci-Fi, Mystery, Horror, you name it. And I enjoyed nearly every one of them in one way or another.

Looking back, I guess I'd have to admit I wasn't a very discriminating reader. I just loved to read. And boy, did I love to read. Ever since I was a kid, I never failed to finish a book that I picked up. Never. No matter what it was about, or how well it was written.

But then I went through my first Borderlands Boot Camp, and suddenly I was putting books down left and right, only half-read. Even new books from authors I'd always liked. They just weren't doing it for me any more.

Learning about the process of writing prose changed the way I read. It made me far more aware of predictable plots, narrative cheats, lazy writing, and in some cases just plain bad writing. And it turns out many of my favorite writers were just as guilty of these transgressions as anyone else.

In fact, there's one writer who used to be on my own personal 'top 3 greatest writers of all time' list, but whose work I can't read anymore without noticing all the passive verbs and the heavy handed narrative voice.

Which brings me to F. Paul Wilson. I was a little nervous when I went back to read one of his books in the wake of my first trip through Boot Camp (where FPW was actually an instructor). Paul was on my personal 'top 3 greatest writers of all time' list, and his novel THE KEEP is one of my favorite books, period. So I was pleased, and even a little surprised, that not only did I still enjoy his books, but if anything, I enjoyed them even more now that I could see the deft way he moved a plot forward, or established a character with only a few well chosen words, or created a creepy atmosphere without hitting you over the head with the words 'dark', 'stormy', or 'night'.

F. Paul Wilson's latest book, JACK: SECRET CIRCLES showcases all of these skills. It's the second in his 'Young Repairman Jack' series, targeted at teenage readers and featuring his classic hero -- Repairman Jack -- as a teenager.

These books have been really engaging so far, fleshing out both Jack's childhood and the mythology that forms the backdrop for nearly all of F. Paul Wilson's stories. As a long time fan of Paul's it's fun to spot all the little threads that link up with other books, but they don't really distract from the story at hand, or the incredibly precise way he tells it.

In a funny way -- and god help me, it sounds like the most over-the-top sucking up ever committed in a blog post -- I envy a teenager who picks one of these books up, gets their first taste for what Paul calls the 'Secret History of the World', and chases it through all of the other F. Paul Wilson books.

When I first read THE KEEP, it was just out in paperback (back in 1983 or so), and Paul hadn't planned on tying everything else who wrote together into one long narrative, and hadn't even conceived of the Adversary Cycle (which forms the backbone of the Secret History), at least not as far as I know, or not as a cohesive whole. But now a reader can burn through all of those books in one go -- much like I burned through JACK: SECRET CIRCLES -- and only have to wait a couple of years for the last few new Repairman Jack books and the revised versions of REPRISAL and NIGHTWORLD. I however have been waiting 27 years.

As for the YA Jack books, my original understanding was that there would only be three of them, but recently Paul mentioned he had an idea for a fourth one. Yes, please. I'll buy that one, as well.

It'll keep me busy while I wait for the Secret History to come to a revised end.
Posted by matthew dow smith at 9:31 PM