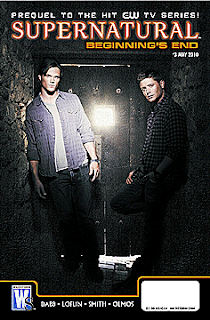 Looks like one of the top secret projects I've been working on is now up for pre-ordering on a number of online comic book shops, so it should be safe to reveal that I drew an issue of DC/WildStorm's upcoming third SUPERNATURAL mini-series -- SUPERNATURAL: BEGINNING'S END -- based on the popular CW television show of the same name.

I was thrilled to draw 'the boys' again, and I'm always excited to work with the gang at WildStorm. I was honored to be asked to return to the Supernatural universe for this issue, and I really wanted to give my editor and the fans the best work I was capable of, so if you remember me talking a while back about a new art technique I'd been experimenting with, this is the project where I finally got to use it.

The artist of this series (the talented Diego Olmos) drew two pages of linking material for this issue and I drew the rest, including some very fun scenes with Sam and Dean running around in the basement of New York's Museum of Natural History.

The issue I contributed to (issue #3) is scheduled to hit the stands in March!

Perpetually caught between Sam and John's arguments, Dean hits a boiling point and drags his brother out for some good ol' monster hunting - at the Museum of Natural History! Time for a little bonding over blood! But the boys' first 'hunt' together goes tragically wrong...and has disastrous consequences for Sam.
Posted by matthew dow smith at 3:29 PM

Awesome news, Matthew! I cannot wait for this issue to hit the stands. Looking forward to seeing the new style...

I picked up issue 1 and I've got to say that it was great. I've been a fan of the show since the beginning and I think the comics have fit right into continuity thus far. You use of light and shadow on issue one was superb. Sam and Dean look great and I'm excited to see this series play out. Great work.