I will be appearing at this Spring's Albany Comic-Con, along with my friends Ron Marz, Terry Austin, Fred Hembeck, Joe Staton, Joe St Pierre, John Hebert, Paul Harding, and a host of other talent from the local area and beyond. The show will be held on April 25th, at the Holiday Inn on Wolf Road in Colonie.

Once again, we'll be doing a special Albany Comic-Con convention variant cover that will be available at the show. This year it's a variant cover for Top Cow's new Magdalena series, written by convention guest Ron Marz. I just finished penciling the cover, and I'm thrilled to say it's going to be inked by one of my heroes, inking legend Terry Austin.

Don't want to give the whole image away, but here's a little sneak peek at my pencils for the cover: 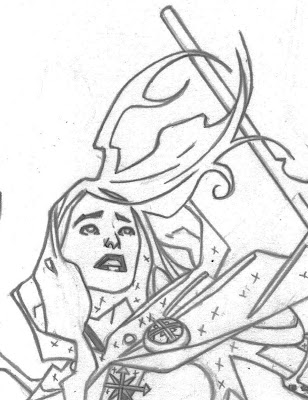 A big thanks to Ron, Terry, John Belksis, and everyone at Top Cow for giving me another crack at a Top Cow cover, and for supporting a great local show.

If you're going to be in the area, stop by and say hello.
Posted by matthew dow smith at 1:44 PM