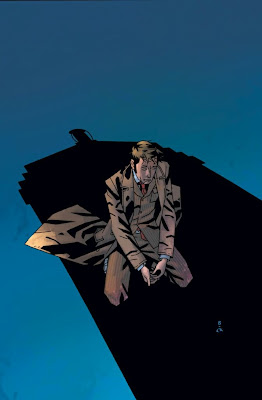 As anyone who has read this blog must surely know by now, I've been a Doctor Who fan since I was 6 or years old, so when IDW Publishing asked me to draw a story arc in their new ongoing series, I was over the moon. When I wrapped up work on those four issues last year, I told everyone who would listen that I had no idea how I was going to follow up a dream project like that.

Now, thanks to IDW's Chris Ryall and Denton Tipton, and ongoing series writer Tony Lee, it looks like I've found a way -- drawing more Doctor Who.

At the Gallifrey One convention in Los Angeles this past weekend, IDW announced several new Doctor Who comic book projects, including the final 10th Doctor Story arc and a brand new series featuring the 11th Doctor.

I'm delighted to say they've asked me to draw both, as well as a short preview story that leads into Tennant's final story, and a short story that I'll be writing as well, both for a Doctor Who annual timed to hit the shelves before that final story begins. 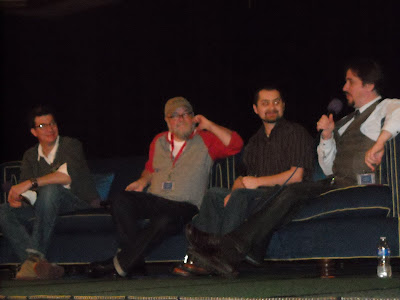 (Me, Richard Starkings, Denton Tipton, and Tony Lee
at the IDW Doctor Who comic book panel at Gallifrey One)
We'll be wrapping up the current ongoing series with the four-issue "Final Sacrifice" (the first cover of which is featured above), which will tie up the long story arc Tony Lee has been planning since issue #1, ending the series at issue #16, and then relaunching the Doctor Who comic book with a brand new #1 featuring the new Doctor, Matt Smith (no relation, sadly).

I'm incredibly excited to be involved in all of this, and looking forward to once again working with IDW, Denton, Tony, and Charlie Kirchoff on my favorite character. Tony's got some great plans for both Doctors, and we heard a lot of great suggestions from people at the convention for things they'd like to see in the new series.

And I'd especially like to thank Gary Russell (who oversees scripts for both the show and our comic) for making all of this possible. 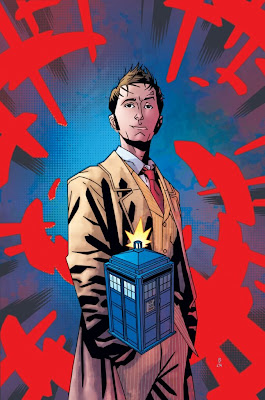 This is a dream come true for me, and the idea of being the regular artist on a new series of Doctor Who comic book stories is more than I could have ever hoped for. A big thank you to all the fans who responded so positively to the "Fugitive" story arc. Your kind words about my art on the book led to all of this, and it couldn't have happened without you. Cheers!
Posted by matthew dow smith at 11:06 AM

Email ThisBlogThis!Share to TwitterShare to FacebookShare to Pinterest
Labels: Doctor Who Ongoing, Gallifrey One, Upcoming Projects

That's a dapper looking group, if I've ever seen one.

Congratulations. its nice to see you showing up on the stands on a regular basis and i am really interested in seeing you write more

I'm giddy for you! Yes, giddy. I can't believe it myself.

All this fortune couldn't happen to a nicer guy. I'm glad all that hard work & uncertainty in the past is finally rewarding you.

Thanks, Amanda. That means a lot coming from you.

Same goes for you, Larry.

I can't thank you guys enough for the years of friendship and support.

I can't wait to see your Matt Smith. That guy's hard!