Actor Patrick McGoohan died today. And while he appeared in a staggering number of films and television shows, I will always remember him as Number 6 in the cult show THE PRISONER, a show he also created and produced. 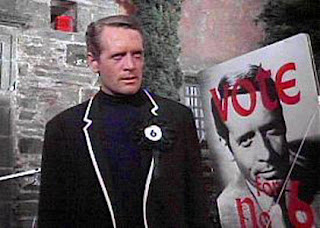 THE PRISONER had a profound effect on me when I was growing up. As a teenager, I instantly responded to its slightly surreal exploration of an individual struggling against the forces of conformity. Part adventure story, part allegory, THE PRISONER shaped my thinking about the world, and influenced my creative aspirations.

I am deeply saddened by McGoohan's passing. Without THE PRISONER, I would be a very different person today. And I seriously doubt I would ever have found the courage to pursue my own artistic dreams.
Posted by matthew dow smith at 5:52 PM

Oh, I hadn't heard - that's so sad! I loved the Prisoner, I even dragged John to Portmerien where the show was shot - I was so excited to be there, even imagining the bubble coming to get us if we wandered too far on the beach!!!!

Yeah, I came across the news online, but it seems to have gotten buried in the wake of Ricardo Montabalm's death (KHAN!!). It took the wind out of me for a few moments.