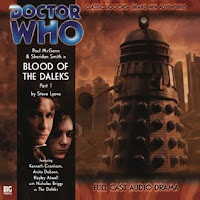 Still on my Big Finish Doctor Who audio story kick. Can't seem to get enough of them. I've listened to the first 25 stories, and now I've moved on to a series of audio plays featuring the 8th Doctor - Paul McGann -- that they produced for BBC 7 Radio.

I wasn't a huge fan of McGann's one television story -- the Fox TV movie produced in the 90s (yeah, yeah, I'm a huge nerd, move on) -- but I've really been enjoying the radio adventures.

They've done two full series of 8th Doctor adventures, with a third coming soon (not to mention the next hundred or so Doctor Who stories that I haven't downloaded yet). So it looks like I'll have a lot of entertainment options as I wrap up my work on MIRROR'S EDGE.
Posted by matthew dow smith at 5:11 PM