The Next Doctor is...

A few years ago, when I set out to do more writing, I discovered several 'Matt Smith's had already published books before me, so I began to go by my full name, Matthew Dow Smith. A move I'd like to think made my Mom happy. The only time she ever uses my full name is when I'm in trouble for something. I can still hear her shouting "Matthew Dow Smith, get down here right now" up the stairs when I've done something wrong.

And now there's another reason to use my full name. The BBC just announced the next actor to take over the role of the Doctor on the long-running (and my long-time favorite) show, Doctor Who -- Matt Smith.

Sadly, it's yet another Matt Smith, and not me. 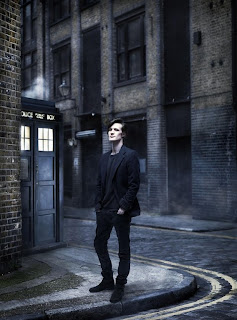 Too bad. I've already got a sonic screwdriver. In fact, I've got two of them. One that's a flashlight, and one that's a pen. Guess my English accent still needed some work.

I wonder how my other namesake -- the Matt Smith who spent a long time as the editor of 2000 A.D. (and actual Englishman) -- feels about this turn of events. Personally, I'm feeling a little vertigo today. As such a huge fan of the show, it feels strange to hear my name associated with it, and part of me wishes it was actually THIS Matt Smith taking over the role.

Email ThisBlogThis!Share to TwitterShare to FacebookShare to Pinterest
Labels: Doctor Who, Matt Smith, the Next Doctor

It's Tess. The strangest thing is I spent the entire weekend watching the entire 4th season of the good Doctor.

I have a day job now. Man, that weekend off idea really has something to it.

Be well, and try to get out of the house once in a while. I'm on Facebook and the phonebook (if you can remember how to spell my last name!)
-t

Nice to hear from you. And congrats on the day job. I'm still working on the concept of days off, much less an actual weekend.

I'll have to look you up and drop you a line when things quiet down on the deadline front.

In the meantime, you can reach me through email at matthew@matthewdowsmith.com.

Personally I think you'd make a good 12th doctor! (and imagine the confusion of Matt Smith being replaced by Matt Smith?) : )